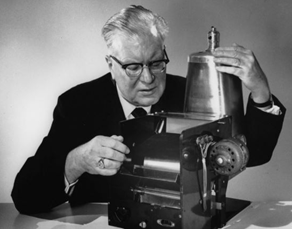 The Dean Heritage Centre and the Xerox Museum are holding an exhibition of photographs, historical information and artefacts, from the Rank Xerox plant at Mitcheldean. Did you know that at one time that the Mitcheldean plant was one of only two where every photocopier in the world was produced? Sadly production has now been transferred to other parts of the world and there are now dozens of manufacturers producing the copiers, which were once pioneered in the Forest of Dean. Thousands of Foresters worked in the factory, which now shows little evidence of the production that took place in the various buildings.

The Memories of Rank Xerox exhibition will run from 5th May until the 17th June at the Dean Heritage Centre. Ex-employees are invited to view the many photographs and to show their children and grandchildren where and how they once worked. There are classic copiers, such as the very first copier ever produced, as well as Bell and Howell projectors on display. If your teacher used a projector at school in the 60’s and 70’s then it was most probably a Bell and Howell. There is an informative timeline of how the factory developed from the first production of projection equipment in the 1940s, to its heydays in the 1970s when over 4000 people were employed at the site.

Visitors can alsoview the other galleries,which display information about the history of the Forest of Dean, whilst the youngsters can enjoy the Forester’s cottage and the Gruffalo trail. The whole family can then relax in the tearoom with a drink and a slice of award-winning cake.